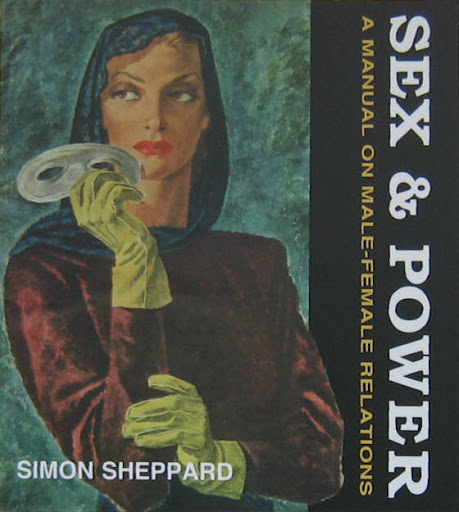 “The male inclination is to encourage the strong, while the female inclination is to nurture the weak. Males value the old for their wisdom and experience, while females value the young for their appeal and future promise.  The Nazi euthanasia programme, whereby mental defectives and the severely handicapped were killed, was a masculine expression. Nonetheless, that programme was rapidly aborted due to public disquiet. A feminine equivalent can be seen in the recent Dutch practice of killing aged and dying patients, occasionally simply to free up hospital beds. This is accepted in Holland and apparently continues to this day.  The male policy is to innovate; the female policy is to imitate.” —Simon Sheppard, ‘Sex and Power: A Manual on Male-Female Relations’ http://www.heretical.com/pubs/sap.html     Sex & Power A MANUAL ON MALE-FEMALE RELATIONS SIMON SHEPPARD Photographs of a few pages of the book. Throughout, yellow boxes denote material from other sou
2 comments
Read more

Battlefield of Love now continues at Voice of Reason

Not only do British men not have an alpha male to lead them, most of them are omega males afraid of omega females

July 19, 2013
Now that I have explained to the beta male of Britain how and why they are oppressed by feminism, which marginalises the beta male, it is up to them to ask their leaders why he won't say anything about it. You would have thought that their leader would be an alpha male, but in fact Britain does not have an alpha male anywhere at all, not even in the highest echelons of government. How can you be an alpha male if you are afraid of offending omega females? Below are some points to note on the Khavian Theory of Race and Gender: An alpha female is the mate of an alpha male.  A beta female is the mate of the beta male.   An omega female is an SSM.   https://www.facebook.com/pages/Are-Spinster-Single-Mums-a-burden-on-the-state/417696111659379  An omega female is undeniably the least desirable female partner for a man seeking a wife to be the mother of his biological and legitimate children. Any male afraid of criticising the morals of the omega female is an omega male. The
4 comments
Read more

Why the alpha male no longer exists in Western society

July 18, 2013
The brutal truth about the laws of the matriarchy is that an alpha male can be deprived of his status, property and children by his wife who may even be an omega female. I say again: an alpha male can be deprived of his status by his wife who may turn out to be an omega female, ie a slut, or an SSM or an adulteress. Those who realise this after seeing this happening to other men he knows, will predictably decide not to marry or have children. If he does have children they will be inferior and degenerate because they are likely to be illegitimate, he is unlikely to be living with their mother, he is unlikely to have authority over them or care much about them because his female partner will have got pregnant accidentally on purpose. The birth rate will continue to decline and each successive generation be more degenerate than the other. The patriarchy gives men authority over women and it is this perceived superiority of their status that makes them do what they are supposed
2 comments
Read more

July 18, 2013
All matchmakers or dating websites can only work with what they have got. All single people by definition have something wrong with them. Beta females do not fancy beta males. Beta males do not fancy women an alpha male would not fancy. Alpha females do not fancy beta males.  Most middle-aged single males are beta. Most middle-aged single females are beta. In most cases, you really should put up with the devil you know.   The fact that you are divorced means you have failed.   That you are contemplating divorce means you are contemplating acknowledging that you have failed.  Divorcing your spouse means condemning your offspring to inferior status, but you are a selfish stupid bitch anyway so you wouldn't give a shit about what happens to your offspring, would you?  If anything bad happens to them or you, you would just claim the victimhood status that you are entitled as a woman to do.  Anyway, most of your friends are single mothers just like you, so why would you give
Post a comment
Read more

Gender politics is the politics of race

July 16, 2013
Consider the answer to the questions below: "All women would rather fuck an alpha of another race than fuck a beta of her own race."  (Please note I said "fuck", not "marry".) "Are you aware that all females *without exception* want an alpha male? If you are beta, your female partner had to settle for you because she realised she couldn't do any better. You were her last bus." "Women probably despise beta males more than the most rabid racist hates people he thinks are of an inferior race." "If you had a daughter and wanted the best for her, would you rather she married a beta male of her own race, or an alpha of another?" If you are male, imagine you are female and had to marry. Which would you rather do?  (a)  Marry a beta male of your own race  (b) Marry an alpha male of another race What would be more rational?  For a woman to marry a beta male of her own race or for her to marry an alpha male of another race
6 comments
Read more

July 12, 2013
http://ask.fm/oneparty4all/answer/54975295105 There is something deeply repulsive about the kind of blatant antisemitism expressed by the more primitive species of ethno-nationalist, and we have an example of this in the link above. For daring to visit a synagogue on London Open Day two years ago and inviting me along so I took photos, Jeffrey Marshall is now suspected of being a Jew because he had to cover his head to enter a synagogue. He was given a skull cap to wear. He wore it, and now every retard in nationalism thinks he is a Jew and therefore the enemy. It is a bit like my flag and gun photo.  In the same way that some imbecilic liberals believe that I am a Nazi, just by being photographed near a swastika, it is generally believed by retard nationalists that Jeffrey Marshall is a Jew because he was photographed in a synagogue wearing a skull cap. I have met Jeffrey's mother and she is not a Jewess.  He is also the son of a publican. It is only to be expected that
6 comments
Read more
More posts